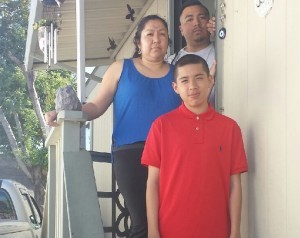 Families stayed in their homes when Western Center intervened in a case of skyrocketing rent.

A family’s home is its safe place, but that safety was almost taken from Amaranda and hundreds of other mobile home park residents in San Mateo County.

Amaranda, a single mother of two boys, cleaned houses to give her kids safe and stable housing, and better opportunities. She used all of her savings to purchase a mobile home and signed a 25-year site lease, written in English legalese, with Bayshore Villa Mobile Home Park. The park manager told her, in Spanish, her native language, that the rent would only go up by 5 percent each year.

Initially, the park charged the appropriate amount, but after a few years, it rose astronomically. Amaranda’s rent went up 79 percent in five years and became unaffordable. She could not afford to move her mobile home, or to move to an apartment in a surrounding county. Moving far away meant a different school for her youngest, interrupting medical care for her oldest, and losing her clients. She would also lose the investment in her mobile home.

Amaranda was not alone. The park owner had been using incomprehensible leases and suddenly raising rents throughout the park. Amaranda and other Bayshore families decided to stand up to te injustice with the help of Western Center and our co-counsels, the Legal Aid Society of San Mateo County and Cotchett, Pitre & McCarthy. She filed a class action lawsuit, alleging that the park owner, one the nation’s largest management companies, had violated state and local law, had breached its lease with residents, and had engaged in unfair business practices.

A San Mateo Superior Court judge issued a preliminary injunction in Cruz v. Sierra Corporate Management, prohibiting the park owner from increasing rents, evicting residents based on nonpayment of contested amounts, threatening plaintiffs with the risk of paying attorneys’ fees, and from trying to offer residents new leases that waived rights under the lawsuit.