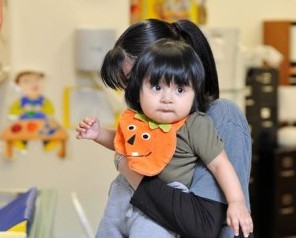 Sarah knows hard work – she’s been employed in the food industry since she was 13 years old. When she became pregnant, Sarah realized her demanding job as a chef would not be enough to pay for childcare and health insurance, so she returned to school and worked at the same time.

The CalFresh benefits (food stamps) Sarah and her daughter received when she was in school kept them from going hungry. But the overly complicated reporting requirements were time-consuming and embarrassing, and required Sarah to disclose her situation to her daughter’s daycare. “It was humiliating. I couldn’t help but think that the entire staff looked differently at me, and maybe even my daughter, after I shared that information.”

The Working Families Anti-Hunger Act of 2013, a bill co-sponsored by Western Center, became law in October 2013. Aimed at working parents like Sarah, it maximizes eligibility and enrollment in CalFresh, including simplifying the process to report childcare expenses, and reducing the reporting burden.

Thanks to this bill, other working parents won’t have to choose between disclosing their personal finances to their childcare providers and going without food.