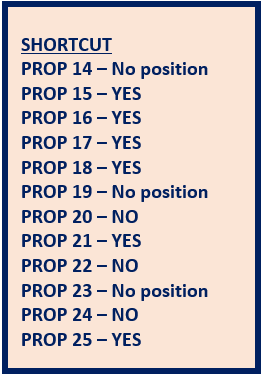 Californians are voting on important propositions on the 2020 California ballot right now. We know it’s confusing, so below you’ll find our guide to the propositions. All of our work, and how we see these propositions, centers around creating greater economic and racial justice, especially for people in California oppressed by poverty.

For more information to help navigate the propositions, we highly recommend the CalMatters proposition guide. If you prefer video, they have one-minute video explanations of each.

An initiative aimed at addressing homelessness in California has been submitted to the California Attorney General for the 2020 ballot, which purports “to get help for those who need it, and thereby also greatly reduce nuisance behavior on our streets.”

The initiative is an embarrassing attempt to make California more visually appealing to those who have no interest or knowledge in addressing the root causes of what is happening to people in our state and country. This proposal would take California back into the dark ages of mass institutionalization of people with perceived or real mental illness. This is not new. California has tried this before, and it didn’t work.

Western Center firmly believes this measure is illegal under a number of civil rights laws. Separate from the legal issues, there are a multitude of problems with the measure. This is not a moderate or compromise proposal, but rather, a return to the now debunked “broken windows” theory Rudy Giuliani used in New York City in the 1990s. Such zero tolerance approaches only exacerbate racial and class disparities through an overly aggressive criminal justice system.

The idea that there are only two sides to this complicated issue is overly simplistic. Homelessness is the result of rapidly increasing income inequality, but it is also the result of years of government mismanagement of resources and funding, as well as institutionalized racism. Voters in Los Angeles just approved significant funding for homeless services, yet countless individuals experiencing homelessness in Los Angeles continue to go without access to services.

Many of the people who currently live on the streets are victims of our foster-care system, or are veterans who served in one of this country’s numerous wars. In those situations, intervention of vital mental health services would have changed the trajectory away from the streets, but because of local and state government’s lack of implementation oversight or commitment to making sure people get the help they need early on, many of those people are left with only the street to turn to.

The State of California has not prioritized providing services or housing for the ~130,000 people experiencing homelessness here. The idea that the state would now have the resources and wherewithal to create and maintain the vast network of institutions this measure would require is absurd.

Gatto’s proposal would require courts to sentence people with substance use disorders or mental illness to maximum criminal sentences. It then allows courts to force people to serve those sentences in locked mental health or drug rehabilitation facilities. Once they have served those sentences, the court has the discretion to keep people locked in those same facilities. Upon completion of the sentence, courts then get to decide whether the individual’s criminal record can be expunged. This will, unquestionably, steer extremely low-income people into the criminal justice system.

The proposition also requires courts to help those without economic means to secure and access housing and other government services, yet it does not provide any funding mechanism to actually increase the services available.

Institutionalization does not work; all one has to do is look at the massive failure that is America’s prison industrial complex. This measure will NOT end homelessness — it’s not even a workable band-aid.

There are proven solutions that this initiative ignores. The state can ensure that the millions of dollars being allocated for homeless services actually get to the people who need them, where they need them. There have not been nearly enough good-faith efforts to make sure people receive the services needed to get back on their feet.

Local and state governments should make sure people have easy access to mental health services when they are wanted and needed. This measure solely blames the victims, but does nothing to hold the systems accountable that put them there in the first place. Mass homelessness is a societal and government failure, and this measure lets government off the hook.

The state must also ensure that safe, stable, and affordable housing is available to everyone. Service delivery is infinitely more effective when people are housed.

California purports to be a leader for the country and the world, but this measure is more in-line with the regressive policies coming from Washington DC than a state that claims to be on the path toward Governor Newsom’s “California For All.”

If #CaliforniaForAll is to be more than just a pithy hashtag, we absolutely cannot start involuntarily institutionalizing the victims of this country’s out-of-control economic system, failed health care system, centuries of legalized racism and discrimination, and never-ending wars.

If this initiative moves forward, Gatto and his supporters can expect a fight from Western Center and our allies.