“Unfortunately, no one tracks fee burden by racial demographic… Because Black and Latinx youth were over punished, they also faced higher fee burdens.” -Courtney McKinney, Director of Communications with the Western Center on Law and Poverty

“The overwhelming majority of families who have children in the juvenile justice system are low income,” said Rebecca Miller, an attorney with the Western Center on Law & Poverty. “Families shouldn’t be charged unless they can pay it.”

2020 has been an unusual year, and the California legislative session was no exception — everyone from legislators to advocates had to adjust to the year’s challenges. Western Center started the year with 38 bills, but due to COVID-19, the Legislature significantly narrowed the number of bills. Even so, our advocates worked tirelessly to make sure people with low incomes are protected in California law, both during the pandemic and after it’s over. Here is a roundup of our sponsored and co-sponsored bills – those that passed, and some we will bring back next year.

*Budget Bills we supported in coalition:

A few bills that didn’t pass this year, but will be back in 2021

The Legislature abolished youth fees through the bipartisan passage of Senate Bill 190 in 2018, but the bill did not prevent counties from collecting fees that were assessed prior to the ban. This new legislation will close that loophole, ending the collection of more than $136 million charged predominantly to low-income families and disproportionately to families of color. 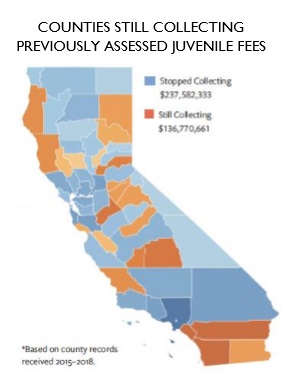 According to Senator Durazo, “Senate Bill 1290 will require counties to stop collecting and formally discharge these regressive and discriminatory fees. Programs that are meant to serve our communities should not be funded by collecting on the debt of very poor people. Most counties have already done the right thing by voluntarily waiving these old fees. Now it is time for the state to act to end them once and for all.”

A 2019 study by the Policy Advocacy Clinic at UC Berkeley School of Law found that 36 of 58 California counties have voluntarily ended the collection of $237 million in previously assessed juvenile fees. However, 22 counties continue to pursue more than $136 million charged to the families of system-involved youth.

“Now is the time to erase ALL outstanding debt for families who are affected by the juvenile justice system,” says Senator Mitchell. “In 2017 I introduced SB 190, ending the costly assessment and collection of juvenile administrative fees. Senator Durazo’s bill takes the law a step further to make sure families are relieved from financial burdens erasing back-owed debt. We have to change the economic and racial disparities in the criminal justice system.”

Just five counties – San Diego, Orange, Riverside, Tulare, and Stanislaus – are responsible for more than 95% of all outstanding fees.

San Diego County charged Andrew Simmons more than $15,000 in fees when his adopted son got into trouble. “We love our children and work to support the intensive care that many of them needed. Unfortunately, the bill has done nothing to relieve the burden placed on us by the County and has put the security of our younger children at risk by placing a lien on our house and indicating that they may garnish our wages,” said Simmons. “Not only is this a personal challenge for us but this practice was one of the reasons people did not adopt older children with special needs. The system should not punish people for opening their homes and giving young people a chance for a family and home.”

Researchers have also found that juvenile fees generate little or no revenue for counties. According to the co-author of the Berkeley study, Stephanie Campos-Bui, “The collection of these fees nets little revenue for counties because the vast majority of families cannot afford to pay. In fact, we found that some counties were spending more to collect fees than they were generating in revenue.”

In fiscal year 2014-15, Orange County spent over $1.7 million to employ 23 individuals to collect just over $2 million in juvenile administrative fees. Since 2018, Orange County’s estimate of annual collections has dropped to $1.1 million per year. In the two years since SB 190 ended new fees assessments, Orange County has collected less than 6% of outstanding juvenile fees. Riverside County reported collecting less than 3% of outstanding fees since January 2018.

Jessica Bartholow of the Western Center on Law & Poverty, a bill co-sponsor, notes the high pain and low gain of counties continuing to collect youth fees: “These fees were bad public policy when they were enacted decades ago and they are bad public policy now. They undermined both youth rehabilitation and public safety with little documented economic benefit to the counties, which is why the Legislature abolished them in 2018 with a large bipartisan majority. We applaud Senator Durazo and the bill co-authors for taking this final step to end the harm of outstanding fees and look forward to working with community leaders and allies to secure the bill’s passage.”

Anthony Robles, an organizer with co-sponsor Youth Justice Coalition, sees SB 1290 as just the beginning of a growing national movement for change: “Years of organizing by directly impacted communities, formerly incarcerated youth and their families, with support from advocates and partners, has led to this strengthening movement to bring debt free justice to all California families and hopefully all families across the country.”

“Even with all this evidence that fees are recidivistic and fees are bad for children and bad for communities of color … we still end up with counties choosing to continue to collect them, and that’s really disappointing,” said Jess Bartholow, legislative advocate at the Western Center on Law & Poverty, which sponsored the original legislation. “Why would we allow these fees to continue to be out there and create harm?”

At the legal clinic run by A New Way of Life, a Los Angeles-based nonprofit that provides shelter and services to formerly incarcerated women and their children, attorneys noticed a concerning pattern.

Community members who served jail or prison time persistently told attorneys that they “were being charged excessive amounts for the cost of probation, amounts that they couldn’t ever hope to repay,” said C.T. Turney-Lewis, the group’s supervising staff attorney. Oftentimes, they “have no income and were leaving probation with thousands and thousands of dollars in outstanding costs.”

…The criminal justice-related fees assessed by California counties are among the highest in the country, with Los Angeles topping the list, according to a study by the Western Center on Law & Poverty, an advocacy group of legal scholars.