16 Western Center bills were signed by Governor Gavin Newsom this year, marking huge wins for California. Of note are two renter protection bills, AB 1482, now one of the nation’s most expansive anti-rent gouging and just cause for eviction laws, and SB 329, which prohibits discrimination against housing voucher holders.

For health care, SB 464 will require perinatal health providers to undergo implicit bias training to address the maternal mortality rate for black women in California, which is 4-5 times higher than it is for white women. For financial security, SB 616 outlaws the ability of debt collectors to drain people’s bank accounts, leaving them without funds for necessary day-to-day expenses. These legislative victories are in addition to big wins achieved in the state budget earlier this year.

See the full suite of Western Center’s 2019 budget and legislative victories below! 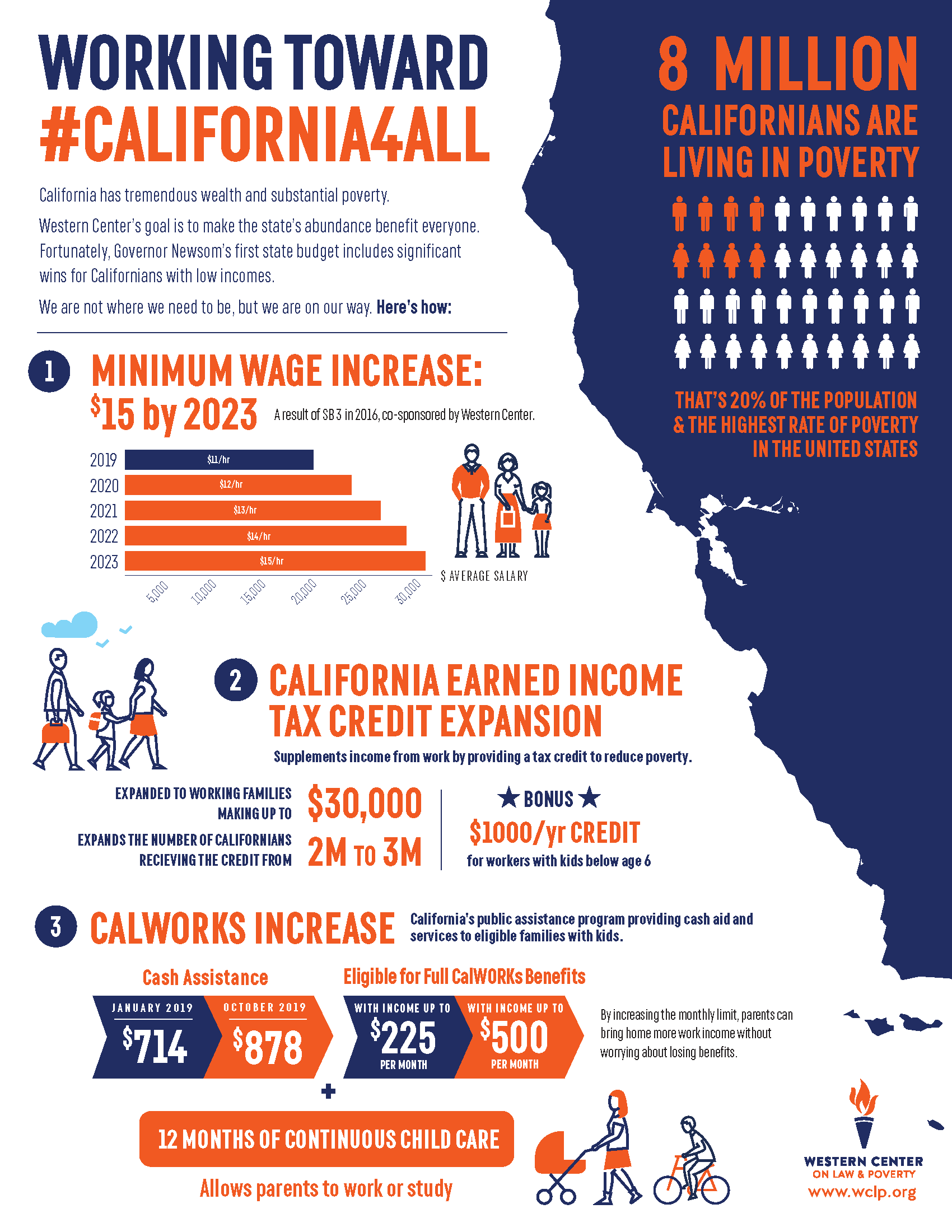 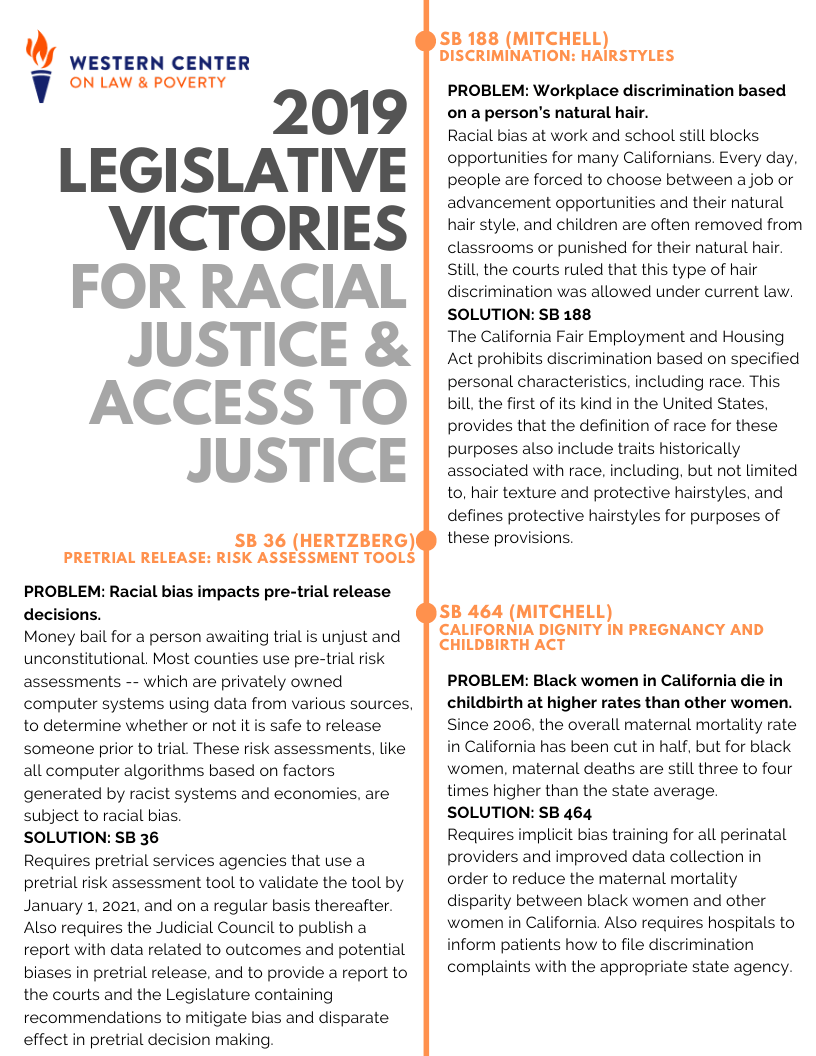 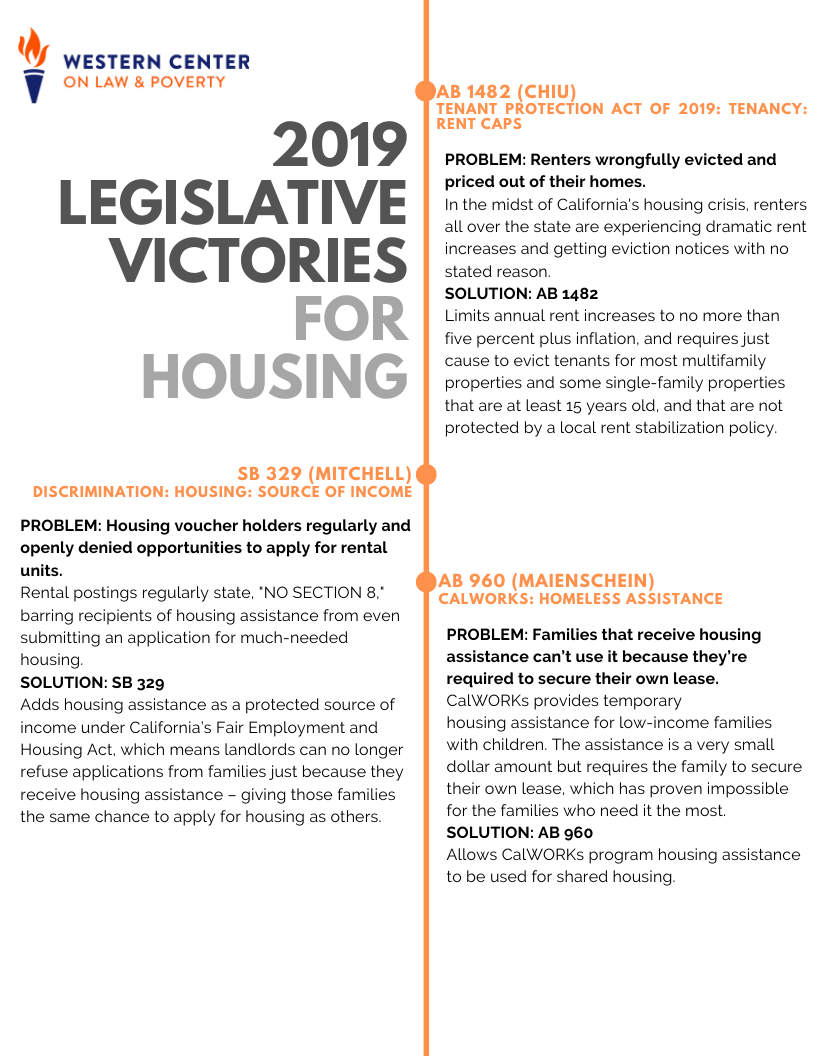 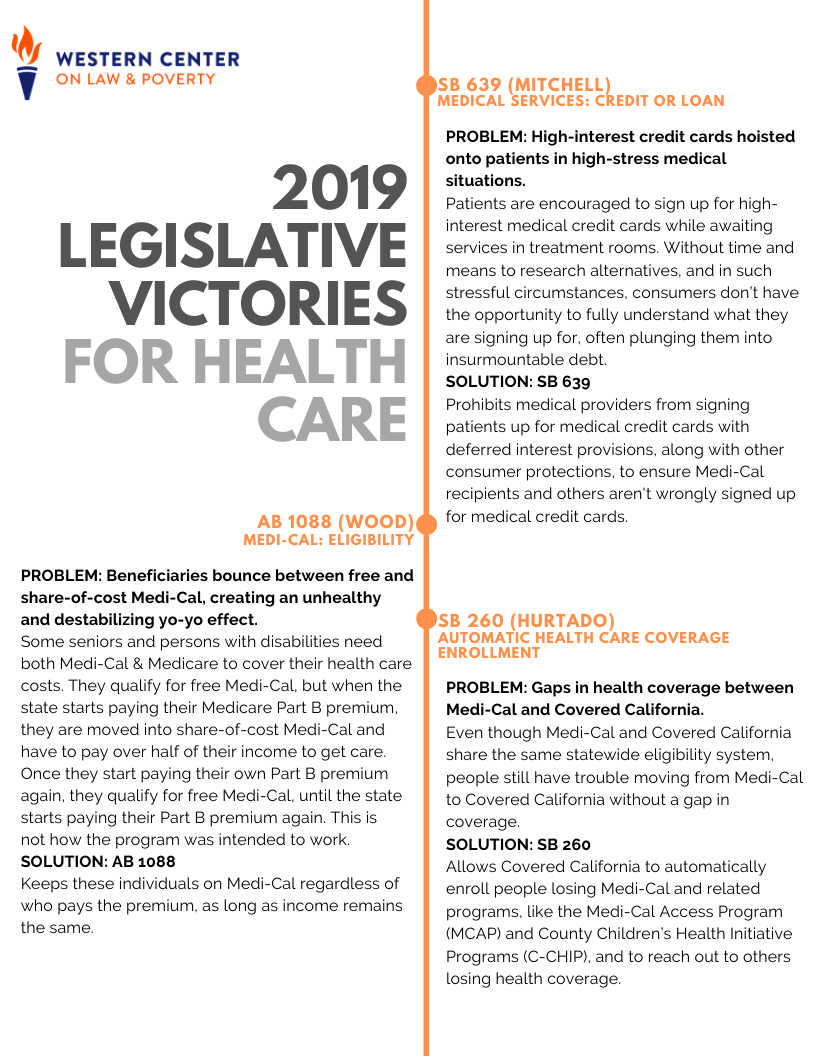 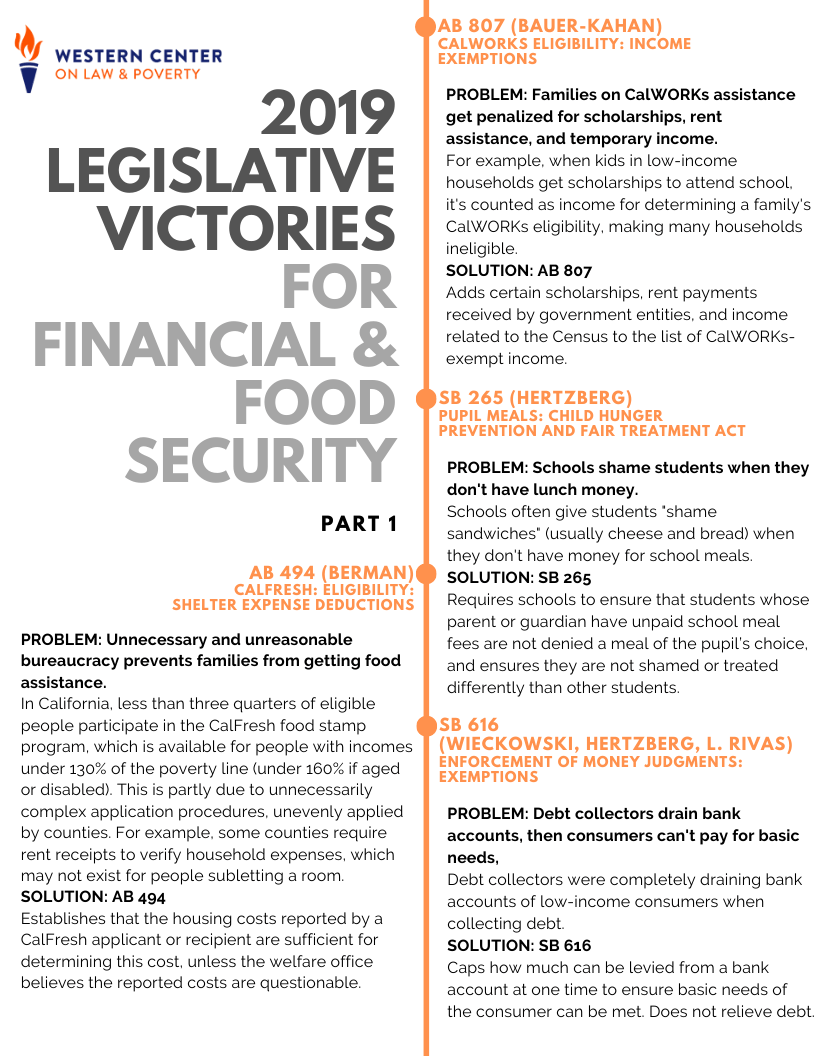 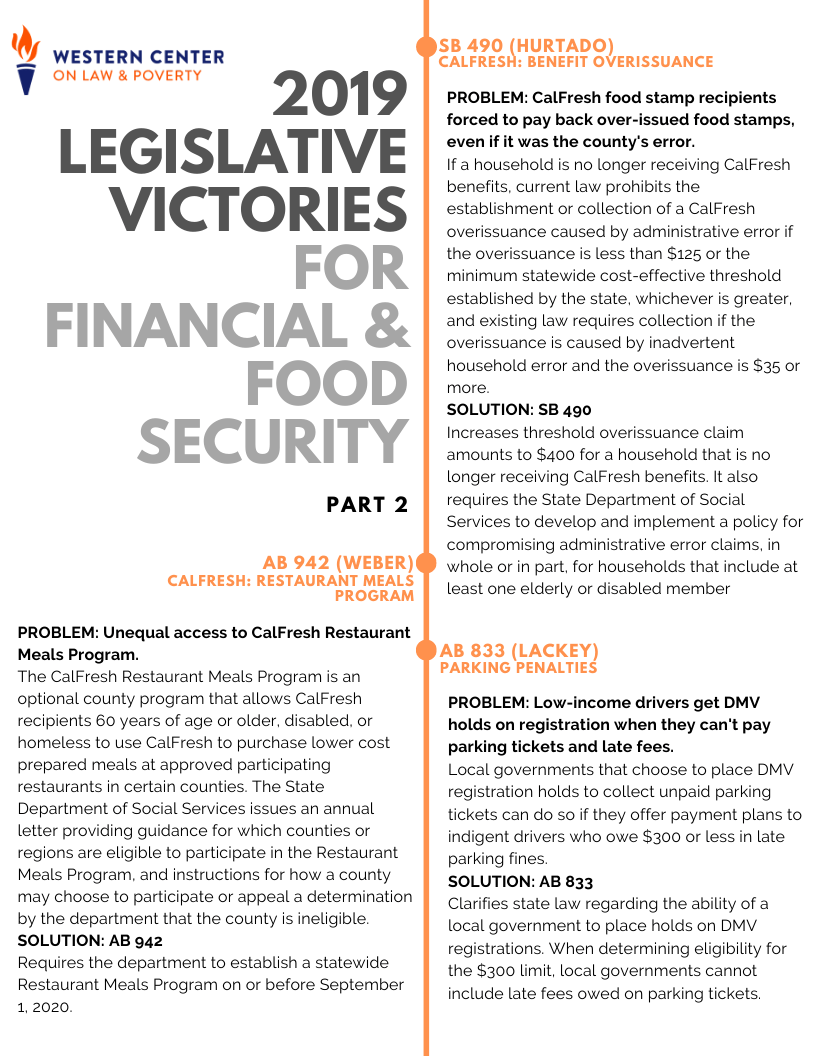 In the Sacramento city school district, nearly half of students with disabilities are separated from peers. A lawsuit claims the district is violating federal law.

…Antionette Dozier, an attorney for the Western Center on Law and Poverty, one of four legal organizations representing the students, said it is a familiar issue but one that is starkest in the state’s capital.

“This is a statewide problem. However, Sacramento is probably the most egregious in terms of racial segregation and the treatment of black students,” Dozier said.

A coalition of nonprofit advocacy groups filed a lawsuit Tuesday in federal court against the Sacramento City Unified School District, alleging that the district discriminates against students with disabilities, especially black students.

Equal Justice Society, Disability Rights California, National Center for Youth Law and Western Center on Law and Poverty filed the suit in the Sacramento-based U.S. District Court for the Eastern District of California on behalf of the Black Parallel School Board advocacy group and three students in the district.

SACRAMENTO, Calif. – A coalition of nonprofit advocacy groups have filed a lawsuit against the Sacramento City Unified School District (SCUSD), Superintendent Jorge A. Aguilar, and others on behalf of the Black Parallel School Board and three students in the District. The suit alleges flagrant district-wide discrimination against students with disabilities, especially Black students.

“SCUSD routinely violates the rights of students with disabilities, particularly Black children with disabilities, by denying them the services and supports they are entitled to,” said Darryl White, Chairperson of the Black Parallel School Board. “Instead, the District tends to unfairly segregate and punish these children.”

In 2017, the Council of Great City Schools, a coalition of 75 of the nation’s largest urban public school systems, released a damning report on the state of special education in the District that validated these long-standing deficiencies. The report was described as a wake-up call by the District, Superintendent, and several School Board members, who vowed to ensure equal opportunities for all children in the District. Sadly, the District did nothing in the year following the report.

In 2018, nonprofit advocacy groups met with Superintendent Aguilar to express their dismay over the District’s continuing failures and demand immediate action. During this meeting, the District promised meaningful reforms and asked for more time to come into compliance. Today, more than two years have passed since the report was published, and the District still has not taken meaningful steps to fix its broken systems and serve students appropriately.

“The District’s failure to act on well-known systemic deficiencies shows a blatant disregard for the education and futures of its students with disabilities,” said attorney Carly Munson with Disability Rights California. “Our clients are paying the price. In 2018, only 61.9 percent of the District’s seniors with disabilities graduated from high school.  And, of those students, only 4.1 percent were prepared for college or a career according to the District’s own public reports. That’s unconscionable.”

SCUSD also promotes a hostile education environment throughout the entire District for students with disabilities, especially Black students with disabilities. The District’s actions and failures create lasting harm, including emotional trauma and feelings of stigmatization and isolation. “The District’s mistreatment of students perpetuates biases and stereotypes rooted in slavery and Jim Crow that create a false narrative of Black students as violent, in order to justify segregation, restraint and exclusion,” said attorney Mona Tawatao of the Equal Justice Society.

Tragically for the affected students, this systemic mistreatment has earned the District the shameful distinction as the District with “the most egregious suspension district for Black males in the State of California,” according to a 2018 report issued by the California Community College Equity Assessment Lab.

“Our lawsuit asks that the District take several actions,” said attorney Michael Harris of the National Center for Youth Law. “These include reforming its policies, procedures, and practices to fully comply with the law so that they no longer segregate or discriminate against students with disabilities, including Black students with disabilities; implementing a plan to correct violations and create a safe, inclusive and welcoming environment for these students; identifying and holding accountable those staff responsible for violations of the laws; and identifying all students with disabilities and ensuring they receive the services and programs they are entitled to under the law.”
____________

Fourth-grader Konrad has been diagnosed with Autism, dyslexia, and Attention Deficit Hyperactivity Disorder (ADHD). Beginning in kindergarten, SCUSD refused to properly assess him or address his disability-related needs. Instead, SCUSD defaulted to exclusionary and discriminatory tactics – first shortening his school days, then suspending him repeatedly for his disability-related behaviors, and finally suggesting that he dis-enroll from school entirely. During the 2018-19 school year alone, Konrad – one of only a few Black students at his school – was formally suspended for 17 days – the equivalent of almost a month of school.

Fifth-grader Stephen has been diagnosed with Autism and Anxiety Disorder. Despite a lifetime in SCUSD, Stephen has never received the mental health services he needs to be successful in school, nor has he had a teacher credentialed to work with students with Autism. Stephen – also one of only a few Black students at his school – has been called racial slurs without consequence and sent home from school on at least 80 occasions for manifestations of his disabilities. Rather than provide lawful and necessary services, SCUSD has repeatedly excluded and punished Stephen.

Eleventh-grader Kurtis also has a history of trauma and known mental health conditions. He aspires to attend college, attend prom, or participate in a Regional Occupational Program. Sadly, Kurtis has been relegated to a nonpublic school that does not provide the same classes or social rites of passage as traditional public high schools. Kurtis fought to attend a public school for ninth grade but was subjected to hostile and discriminatory conditions. He was targeted by peers with homophobic and racial slurs; staff posted a sign outside his classroom proclaiming the students were “Emotionally Disturbed.” Eventually, Kurtis, who is also Black, was unilaterally removed from his high school for behavior that SCUSD explicitly acknowledged was disability-related and sent back to a nonpublic school for students with disabilities. Kurtis is frustrated, bored, and will not be ready to enroll in college or get a job when he graduates next school year.

KNOW YOUR RIGHTS: If you are a parent of a child with a disability within the Sacramento City Unified School District (SCUSD) and are experiencing similar concerns mentioned in this lawsuit, please contact the Disability Rights California confidential intake line at 1-800-776-5746, available 9:00 am – 4:00 pm, Monday through Friday.

For National Center for Youth Law:

For Western Center on Law & Poverty: