SACRAMENTO—California counties have stopped collecting hundreds of millions of dollars from vulnerable families after the passage of Senate Bill 190 (Mitchell, Lara), which abolished fees in the juvenile legal system, according to a new study released today by UC Berkeley Law School’s Policy Advocacy Clinic. Some counties, however, continue to charge prohibited fees to families and to collect past fees. The full report is available online here.

According to San Mateo County resident Sonya N., “It was a blessing when San Mateo stopped collecting thousands of dollars in fees they had charged me from my son’s juvenile case. As a single parent with two kids, it was a real hardship to make that payment every month. When the County cleared the old fees, it was less of a struggle to buy gas or pay for my family’s basic needs.”

However, not all parents and guardians live in counties that ended fee collection. San Diego County parents Andrew and Christina S. were charged more than $15,000 in juvenile fees when their adopted son got into trouble: “We were thrilled when we learned that SB 190 was passed, but it did nothing about the fees that we were charged for one of our six children we adopted through the County foster care system. Instead of applying the tenets of SB 190, the County accelerated collection efforts with a judgement, lien, and now threats to garnish our wages. We would hope that all families with juvenile fees can get relief.” 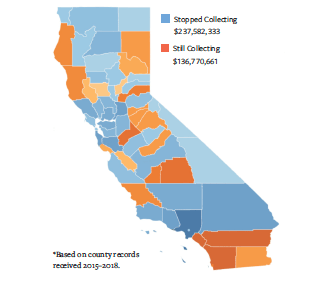 Researchers found that all counties stopped charging new juvenile fees before the law went into effect. Although SB 190 did not waive previously assessed fees, 36 counties voluntarily discharged or stopped collecting them, relieving hundreds of thousands of families of more than $237 million.

According to study co-author Stephanie Campos-Bui, “The majority of counties have taken it upon themselves to end the collection of hundreds of millions of dollars in previously assessed fees. Such widespread relief is unprecedented in the history of criminal justice reform and can serve as a model for debt-free justice in other states.”

Counties have gone beyond the requirements of SB 190 in other important ways: one county refunded families who made payments on unlawfully charged fees, some counties stopped charging fees not repealed by SB 190, and three counties repealed fees in the adult system.

In spite of significant progress, the study found that some counties are violating SB 190 by pursuing prohibited juvenile fees through child support orders and by charging young people ages 18-21 in the adult system. According to Western Center on Law & Poverty Legislative Advocate Jessica Bartholow, “With other legal services providers across the state, we are actively monitoring and addressing these ongoing violations. We expect counties to comply fully with SB 190.” 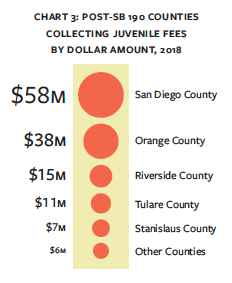 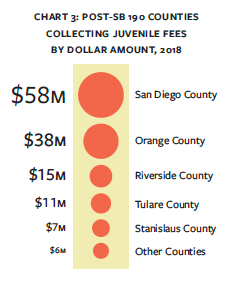 Twenty-two counties are still pursuing over $136 million in previously assessed juvenile fees from California families. Of these counties, San Diego, Orange, Riverside, Tulare, and Stanislaus are collecting more than 95% of the total statewide. San Diego, home to Mr. and Mrs. S., is still collecting $58 million from families.

In light of these findings, the researchers recommend that counties stop assessing all remaining SB 190 fees, voluntarily end collection of previously assessed fees, and notify affected youth and their families of the law change. The researchers also recommend that the state oversee local child support compliance with SB 190 and pass legislation to make all previously assessed SB 190 fees unenforceable and uncollectable.

In response to the study, SB 190 co-author Senator Holly J. Mitchell said, “We can all be proud of the progress that we have made, but it is clear we can do better. I look forward to continued work with impacted youth and their families until all fee collection is ended statewide.”

Congressman Tony Cárdenas of California’s 29th Congressional District also said the study’s findings were a call to action: “We need to end the cruel practice of collecting fees from youth that keep children in jail and American families in debt. I am proud to have introduced the Eliminating Debtor’s Prison for Kids Act and to be leading the Congressional call to action to end these unfair fees. I urge my colleagues in Washington and legislators in my home state of California to join me in my fight to ensure that our youth have a second chance at a better life.”